Call Us Now
Scroll Down 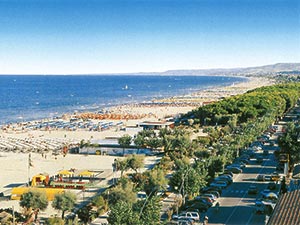 Discover with us the wonders of our territory.

AN AREA TO DISCOVER 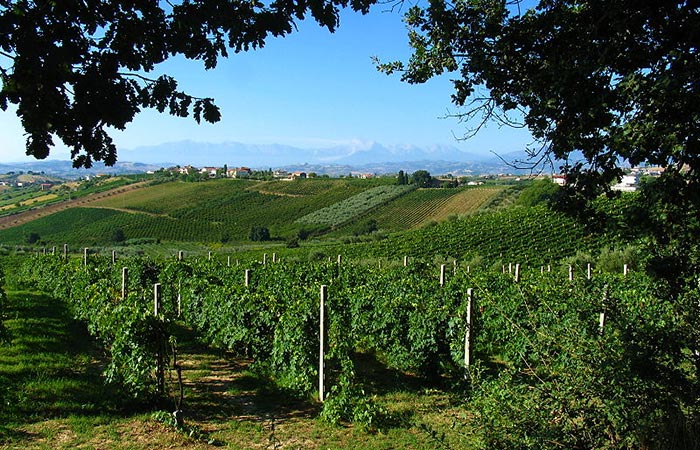 Corropoli has very ancient origins dating back to the Neolithic period, as evidenced by the finds discovered at the end of the 19th century by a local doctor. Corropoli has a long history. It was built in the Neolithic when the first inhabitants settled on the modern Ripoli not far from the river Tronto and from today's municipality of Corropoli. The charm of this archaeological site is characterized by its 80 Neolithic huts found at the end of the 19th century. Corropoli is not famous for its history, but also for its tasty traditional dishes available all year round but in particular during the gastronomic Vibratiana Festival taking place at the beginning of August.

The Middle Ages and the Renaissance
Corropoli was for many centuries, from the twelfth to the eighteenth century, the domain of the Acquaviva, and was an important center for the spread of Christianity within the territory, as evidenced by the numerous Benedictine, Celestine and Franciscan monasteries built in the late medieval era. The castle, home of the Acquaviva during their dominion over those lands, was destroyed at the end of the 19th century, and in its place is now the Piazza Piè di Corte, one of the architectural attractions of the town.
The Marian Sanctuary
Corropoli is a center where spirituality is present and is expressed through religious monuments, including the characteristic Marian Sanctuary, which stands near the town square, where the effigy of the Madonna of Holy Saturday is located and other precious statues and effigies, including the Madonna di Santa Maria di Mejulano, dating back to 1100.
The Palio delle Botti di Corropoli
One of the best known events organized in Corropoli is the Palio delle Botti, in which the Renaissance history of the village is renewed, through a competition in which two teams compete in a path in which they drag heavy barrels up the hills of the town. The Palio is organized in the second week of July, since the last years of the nineteenth century, and includes numerous side events, which attract hundreds of tourists every year. 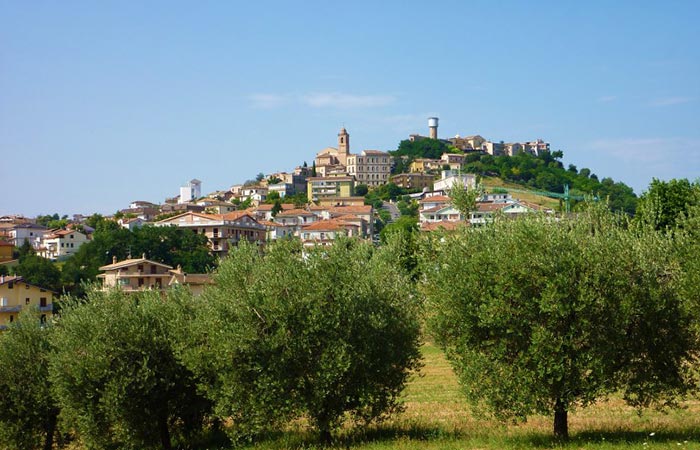 Colonnella is a small village of 3,300 inhabitants where you can admire an unparalleled mountain landscape. From the top of the hill of this village, you can admire a beautiful skyline on the Gran Sasso mountain range, the Majella mountains, the Sibillini mountains and the Adriatic Sea. This is blue-green horizon where you can live a unique experience created by the fascinating origins of this place that, though renovated, still evokes ancient times

From Truento
The origins of Colonnella are linked to the ancient center of Truento, in fact until the sixth century the village was known by this name, linked above all to the processing of purple. The modern name is more recent, when the center became a fief first of the Colonnella and later of the Acquaviva.
To visit: the sources ...
Colonnella is a village that offers visitors various historical and architectural attractions starting from the ancient source located on the outskirts of the town, known as the Old Fountain of Roman origin, up to the Fonte Ottone and the two ancient Roman cisterns, Cicolà and Ricci.
... and churches
Religious buildings are also interesting places from a historical and artistic point of view, the Church of Santi Cipriano e Giustina, built in the 18th century on a sixteenth-century structure, houses a canvas by the painter Tommaso Alessandrino from Ortona, an ancient statue in wood depicting a Madonna adorned with rich robes and an organ of excellent workmanship from the 19th century. 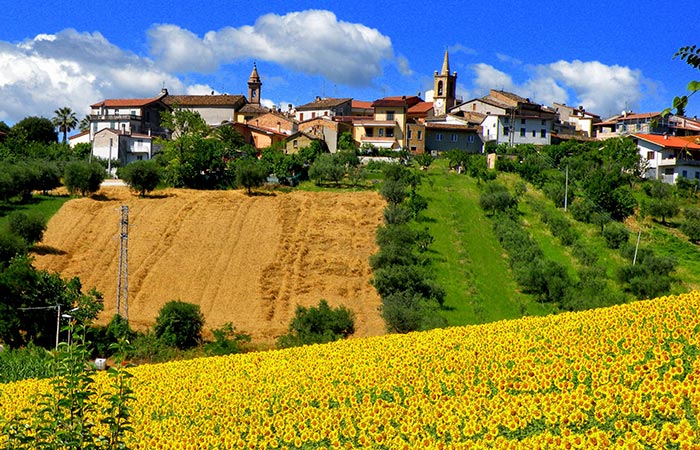 Torano Nuovo is a village in the province of Teramo renowned for the tasty festival of wine, sausage and pecorino cheese, produced in the area. This small town in Val Vibrata is also known as the 'Capital of Montepulciano d'Abruzzo' wine thanks to the numerous vineyards carefully cultivated by its local inhabitants who every year celebrate the harvest with a local festival. For over 40 years the festivals of wine, sausage and Pecorino cheese have been celebrated in Torano Nuovo every August.

The second week of August turns into a party in which tourists and lovers of good food can taste the excellent wines produced in the area, above all Trebbiano and Montepulciano d'Abruzzo, and the excellent cheeses and sausages prepared according to traditional recipes, which maintain the scents and aromas of the nature that surrounds the territory.
The History of Torano.
As for the history, Torano has very ancient origins, probably Etruscan. It suffered total destruction in the 15th century, during the "Gypsum War" of Charles VIII. Right after the collapse, the surviving inhabitants, with the strength of spirit typical of the people of Abruzzo, rebuilt the town, giving it the name of Torano Nuovo, because it was renewed after the tragedy.
The Churches in Torano Nuovo Torano Nuovo maintains a silent and peaceful face, favored by the panoramic position, on a hill in the Val Vibrata. The religious buildings of the town are important testimonies of the past, the Church of the Madonna delle Grazie built in the eighteenth century, the Church of San Massimo, dating back to the eleventh century, which maintains an altar of Renaissance origin and the Church of San Martino with wonderful frescoes painted in the 15th century.
The Museum of Sacred Art
Located near the church of the Madonna delle Grazie, the Museum of Sacred Art contains furnishings and objects related to the faith and religious sentiment that has always distinguished the inhabitants of Torano Nuovo.